This project consolidates long-established collaborations between France and Romania within the framework of 1- the « SEEG Danube » Global Ecology Study Site of the CNRS Institute of Environmental Ecology and 2- the « Archaeology of the Danube Delta » Mission led by Laurent Carozza (CNRS UMR 5602 GEODE, Toulouse) and Cristian Micu (ICEM, Tulcea). Its aim is to enable the organisation of working meetings or seminars, the development of joint research activities including field research, and the supervision of students.

Summary of the project:

Coastlines and deltas are « hot spots » for biodiversity. These environments, which are subject to global changes, are sensitive ecosystems whose management requires an understanding of the mechanisms of their formation and functioning. The objective of our Associated International Laboratory is to reconstruct, over the long historical period, the evolutionary trajectories of one of the largest hydrological complexes: the Lower Danube and its delta.

The role of hydro-climatic forcing as a control factor and the impact of past and recent human interventions on the construction of the largest European wetland will be highlighted. Recent work shows that the first human interventions appear in the Danube Delta around 7000 BP. The challenge is to apprehend the modalities of the passage from a natural anthropised system (paleo-anthropocene), defined as a co-constructed system, to an anthropocene in which anthropisation becomes the determining forcing factor.

The way the Black Sea has evolved during the post-glacial period is an object of controversy, both as regards the date of reconnection with the Mediterranean system via the Sea of Marmara, and the extent of the transformations that this reconnection has induced, as well as the consequences on the population dynamics of the western and eastern shores of this marginal sea. Previous attempts at reconstitution are mainly based on the study of marine records – both coring data and seismic reflection data for the ancient period (< 6,000 BP). These models have made little use of continental data, i.e. deltas, to better constrain this evolution, although they are likely to provide data of primary importance. This project proposes to discuss the different scenarios that have been proposed based on the knowledge of the evolution of a deltaic system, the Danube Delta, as it can be reconstructed by an approach combining geomorphological, archaeological and paleo-ecological data. The data on the evolution of landscapes, settlements and ecosystems thus collected will then be used to test scenarios of the evolution of settlement in the Danube Delta during the Holocene and thus enable validation.

In this project, the entire history of the Holocene Delta, from the reconnection with the Mediterranean Sea to the contemporary period, is taken into consideration. Far from being a natural area, the Danube Delta is a mosaic of anthropised ecosystems (main and secondary channels, lakes, dunes, interdune wetlands, etc.) whose production process is still largely underestimated by managers (Danube Protection Commission, DPC, created in 1994 in Sofia and effective since 1998 or Danube Delta Reserve).

The challenge of this project will be to reconstruct the geo-historical environmental evolution of this area and to highlight the role of past or recent human interventions in the functioning of the environment, its alteration and possible degradation with a view to taking it into account in the management of this environment. Its originality is to position itself at the interface between the geo-historical approach and the geomorphological approach, i.e. to couple the approach through ancient documentation to field sources by validating and completing them. For the geo-historical approaches, it will rely on exceptional and unpublished documentation from the communist archives currently being declassified and on the knowledge of the delta by the support team and partner organisations for the field component. 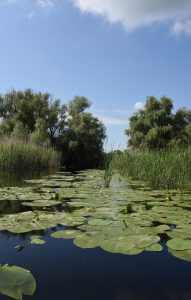