In Search of an Identity?

Since 2007, programmed excavations directed by R. White in the Aurignacian sites of Blanchard and Castanet have resulted in renewed studies of graphic art representations and have led to a new approach to some of the earliest parietal art from a cultural, chronological and environmental perspective. The analysis of the formal and technical artistic characteristics within each archaeological context as part of all the known representations on limestone blocks in rock shelter habitation sites in the northern Aquitaine reveals a form of cultural territory.

Although certain graphic, as well as socio-economic choices, seem to be used partly as identity markers, convergences with other European regions can also be observed. These graphic representations thus seem to express both the need to mark out territory and at the same time, a sense of belonging to a wider cultural entity. This dichotomy undoubtedly contributes to the broad stylistic diversity present at the beginning of the Upper Paleolithic. In this paper, we seek to define the reasons for such diversity of behavior and graphic arts within the Aurignacian culture.

A History of Archaeology

The Abri de la Souquette is little known today when compared with the neighboring sites of Abri Castanet and Abri Blanchard. A long history of investigation at the Abri de la Souquette has led not to a wider understanding of a site with significant Aurignacian deposits, but rather to scholarly obscurity as a site devoid of further research potential. In this paper, we attempt to lift some of this obscurity by chronicling the history of research at this site, and provide new radiocarbon dates demonstrating contemporaneity with the Castanet Aurignacian.

Renewed excavations directed by R. White in two Aurignacian rock shelters in the Vallon des Roches (Sergeac, Dordogne, France), Castanet (2005-2012) and Blanchard (2011-2012), have yielded reliable new series, and have improved our knowledge and reflections of the Aurignacian from these two reference sites.

Castanet Rock shelter was excavated over a surface of several square meters and yielded a single level, lying directly on the rocky substratum. Blanchard Rock shelter had been practically emptied by early excavations, but nonetheless contained two relatively rich archaeological vestigial deposits, without stratigraphic overlap. Excavations in these two contiguous rock shelters, at the foot of the same cliff, yielded sufficient collections for a reliable typo-technological analysis and an updated cultural attribution.

THE CHRONOCULTURAL SEQUENCE OF BELGIAN COMPLEXES
IN THE EUROPEAN AURIGNACIAN CONTEXT

The study of Aurignacian collections from the Meuse Basin, associated with recent fieldwork data, has led to a new overview of the Aurignacian in this region. This work discredits some of the hypotheses advanced for the earliest Aurignacian occupations in north-western Europe and proposes a hypothetical chronocultural sequence based on the most reliable data for this period. The Meuse Basin presents an important concentration of Aurignacian occupations, some of them very rich and this zone is therefore conducive to large scale comparisons, in particular with regions with a better defined chronostratigraphic framework. The existence of technical and artistic similarities between these different European regions also highlights the strong links binding the Aurignacian complex, and is probably an important element for understanding the transition from the Middle Paleolithic to the Upper Paleolithic in Europe.

ORIGIN AND DEVELOPMENT OF AURIGNACIAN OSSEOUS
TECHNOLOGY IN WESTERN EUROPE:

a Review of Current Knowledge

The exploitation of osseous materials is one of the main innovations associated with the advent of the Upper Paleolithic in Europe. The concept of the Aurignacian, as defined by Abbé Breuil, was used for a long time as a strong argument in favor of a cognitive revolution: its “sudden” appearance was linked to the rapid and systematic diffusion of the Aurignacian culture and the widespread distribution of split-based points in Europe, and upheld the idea of a clear biological and conceptual rupture with the Middle Paleolithic. Since then, several factors have contributed to undermining this model. Renewed studies of Aurignacian osseous technology in Western Europe contribute to the ongoing redefinition of the mechanisms behind the construction of the Upper Paleolithic in Europe.

Early Aurignacian osseous production was by no means limited to split-based points, and involved a wide variety of activities. The production of the different materials was already well structured and centered around three main spheres: reindeer antlers were mainly used for arms, bone for the fabrication of domestic equipment and ivory was mostly reserved for ornaments.

Although osseous technology was identified in some “transitional” groups, it spread and was durably integrated into techno-economical systems during the Aurignacian. It developed gradually in Europe and based on currently available knowledge, appears to have emerged in the Protoaurignacian societies of Western Europe. The emergence of this new technical domain seems to result from the transfer of wood working techniques to osseous materials, undoubtedly partly linked to a sudden shift in environmental conditions in Europe around 40000 BP. The evolution of osseous production during the course of the first phases of the Aurignacian provides evidence of profound techno-economic changes, which, backed up by data from lithic studies, reveals powerful sociological changes during the transition between the Middle and Upper Paleolithic.

THE AURIGNACIAN VIEWED FROM AFRICA

The Aurignacian technocomplex in Eurasia, dated to ~43-28 ka, has no direct archaeological taxonomic equivalent in Africa during the same time interval, which may reflect differences in inter-group communication or differences in archaeological definitions currently in use. Extinct hominin taxa are present in both Eurasia and Africa during this interval, but the African archaeological record has played little role in discussions of the demographic expansion of Homo sapiens, unlike the Aurignacian. Sites in Eurasia and Africa by 42 ka show the earliest examples of personal ornaments that result from extensive modification of raw materials, a greater investment of time that may reflect increased their use in increasingly diverse and complex social networks.

This paper contributes to the discussion of one of the central questions raised by the Aurignacian: can we really identify the mechanisms of a biological and behavioral coevolution in this key transitional culture between the Middle and Upper Paleolithic, associating anatomically modern humans with a range of accomplishments also readily described as “modern”? And if so, how did these different parameters influence each other? The analysis proposed here suggests that, above all, the reconfiguration of social relations was a decisive driving force behind evolution, directly influencing biological diversity through increased contact and intermingling between groups and populations.

Bon F., 2015 – At the crossroads, in White, in White R., Bourrillon R. (eds.) with the collaboration of Bon F., Aurignacian Genius: Art, Technology and Society of the First Modern Humans in Europe, Proceedings of the International Symposium, April 08-10 2013, New York University, P@lethnology, 7, 8-18. 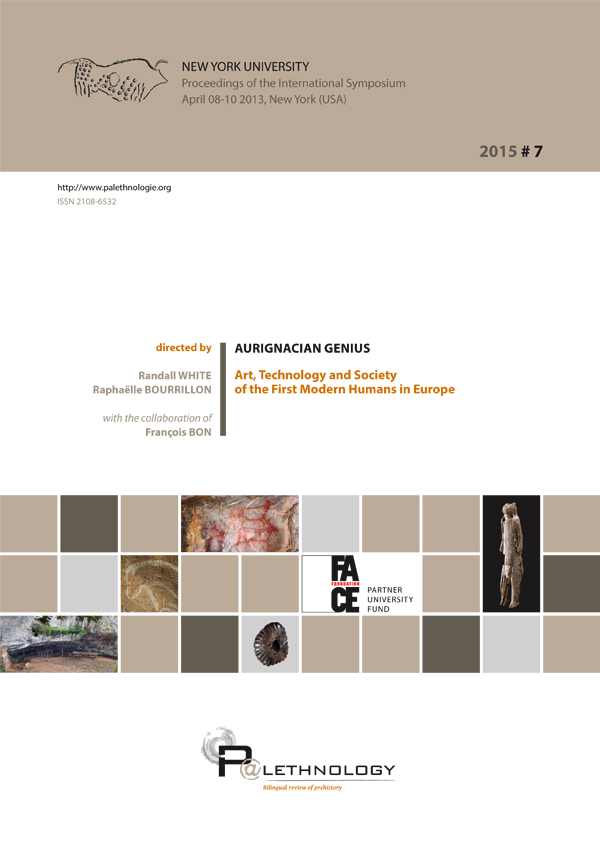 THE AURIGNACIAN VIEWED FROM AFRICA

ORIGIN AND DEVELOPMENT OF AURIGNACIAN OSSEOUS TECHNOLOGY
IN WESTERN EUROPE:
a Review of Current Knowledge

THE CHRONOCULTURAL SEQUENCE OF BELGIAN COMPLEXES
IN THE EUROPEAN AURIGNACIAN CONTEXT

THE LITHIC INDUSTRIES FROM
BLANCHARD AND CASTANET ROCK SHELTERS (DORDOGNE, FRANCE):
Data from the 2005-2012 Excavations

EARLY AURIGNACIAN GRAPHIC ARTS IN THE VÉZÈRE VALLEY:
In Search of an Identity?

THE AURIGNACIAN IN SOUTHERN BURGUNDY

MARINE RESOURCE EXPLOITATION DURING
THE MIDDLE AND EARLY UPPER PALEOLITHIC IN EUROPE:
Overview of the Available Evidence

IN SEARCH OF LOST TIME. DATING METHODS FOR PREHISTORIC ART:
the Example of Aurignacian Sites

EVALUATING AURIGNACIAN ART IN IBERIA…
If it Really Exists

ANIMATION AND GRAPHIC NARRATION IN THE AURIGNACIAN

FROM GESTURE TO MYTH:
Artists’ techniques on the walls of Chauvet Cave

PERSONAL ORNAMENTS OF THE SWABIAN AURIGNACIAN